Accounting for all of the obvious points of power consumption and their current levels for active and sleep states can be a difficult task. In every design there are also points of power consumption that are often overlooked. Every type of semiconductor device has some amount of “leakage current” that may or may not be called out in its datasheet.  Leakage current can make up the majority of the deep-sleep current draw for a modern micro when it shuts off power to most of its internal circuits. There may also be aspects of your design that can “leak” microamps to milliamps of current that you don’t take into account.

Capacitors can be a major cause of unexpected current draw due to their leakage current. Some amount of leakage is unavoidable for any type of cap but to some degree leakage current can often be reduced through part selection.  This is what you should know about leakage current for the three most common types of capacitors.

As you can see, capacitance and the rated voltage are the primary factors in the leakage current. A couple of things not shown in this equation:

Tantalum – Often the primary choice when high capacitance is needed in a small space, tantalum caps also offer potentially much lower leakage currents than aluminum electrolytic caps. The formula typically used to calculate their leakage current is shown below.

Ceramic – While not capable of the high capacitance density of aluminum electric and tantalum caps, ceramic caps by far suffer the least from leakage currents. The formula typically used to calculate their leakage current is shown below.

The differences in leakage currents between the types of caps are obviously very significant for ultra low power design. Multiply these numbers by the number of caps in your design and the leakage current can become a significant part of the sleep state current of your device. This is particularly true for a device with a wireless radio where there may be several hundred microfarads of capacitance to prevent a voltage droop when the radio starts to transmit.

The second part of this post will discuss leakage current in other types of semiconductor devices along with sources of current leaks commonly found in many designs.

It’s been a few crazy busy months at work but I should be getting back on track with regular postings next week. This week I just have a few things that might be of interest …

First, my company started a crowdfunding campaign on Indiegogo last week. We have working prototypes of our µPower Analyzer and µCurrent Probe and need help to ramp up production of the µCurrent Probe. We’re offering pre-orders on both products at a 20% discount. We also have a low-cost version of the µCurrent Probe for the Maker community planned for later this year but if we can pre-sell the first production run of 75 units (with a 30% discount!) we’ll move that up for production in the June. The link is below, please help us spread the word about this.

I was introduced to a company a few months ago that has some super low current real time clocks. Ambiq Micro in Austin, TX has a family of RTCs (with and without power management features) with 7X lower current than the industry standard RTCs. They use a technology developed at the University of Michigan called “Subthreshold Power Optimized Technology” that allows their RTCs to operate as low as 14nA. Ambiq has announced they are working on an ARM Cortex M0 micro utilizing this technology to be sampled later this year (ARM is one of their investors).

I came across these related articles this past week. They have some good numbers showing just how much of an impact firmware/software can have on power consumption. The first article shows that encrypted storage uses about 6X more power than unencrypted storage and in one test the encryption software accounted for 42% of the CPU utilization. The second article indicated that the Flash memory used for data storage only used 1% of the power required for storage operations – the OS, file system and encryption code accounted for the other 99%.

Finally, we’re on social media now so you can get updates on blog posts and our company news: 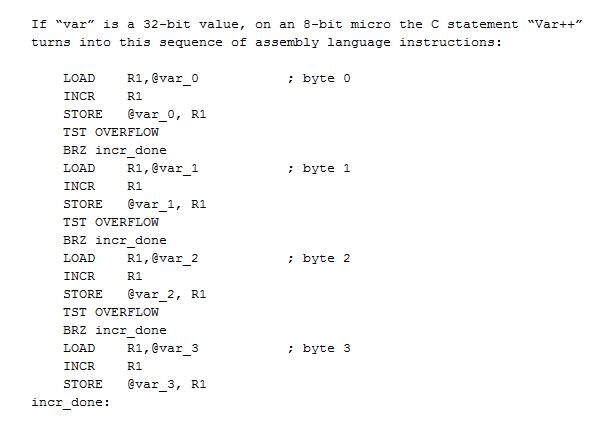 Last we I discussed several aspects of using batteries. This week I’ll discuss battery charging related issues and wrap up with a couple of physical considerations for battery usage.

If you are new to designing battery powered products, it will be well worth your time to do some in research into the various battery technologies Even if you are an old hand at designing with batteries, if you are considering a battery technology you haven’t used before for you product you should do some in depth research in that technology to understand it’s intricacies. Manufacturers of batteries intended for industrial applications or OEM use generally provide considerably more details in their spec sheets than those for consumer oriented batteries. These spec sheets and app notes are a good source of valuable information. 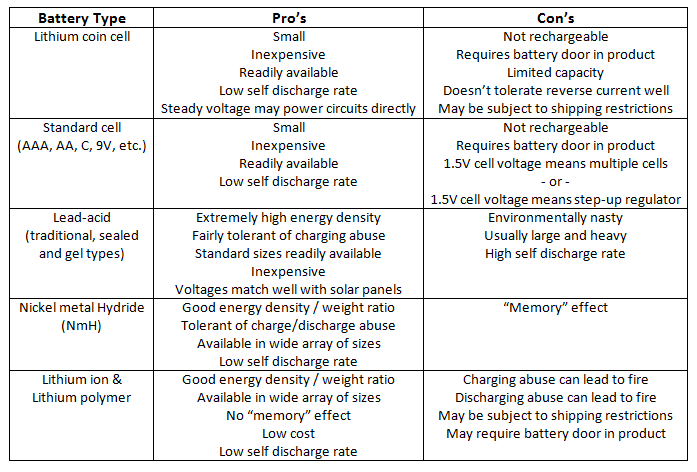 We live in an era where saving energy is a topic that receives considerable attention. For design engineers, there are many different motivations for saving energy from your company being able to claim your newest gizmo has longer battery life than any of its competitors to conserving natural resources to reducing the air pollution and greenhouse gas emissions associated with generating electricity. Until recently, reducing energy usage in electronic circuit designs was primarily a concern for designers of battery power products. Today, legislative restrictions on energy usage are covering more and more types of products and the marketplace pressures for reducing energy usage are impacting nearly all types of electronic products from consumer electronics to IT equipment and even industrial and manufacturing equipment. In our “instant on” world where few things are ever really turned completely off, the energy a device uses when it is doing nothing is becoming more important than the energy it uses while operating. These so called phantom loads drive megawatts of electricity generation daily and are squarely in the sights of legislators writing energy efficiency regulations.

There are a number of ways to reduce the energy usage of your designs. Your hardware design will establish a baseline for the minimum amount of power your product consumes but for many types of products the firmware will really determine the overall power usage. Sophisticated software power management schemes that were once mainly employed in laptop computers and cell phones are being implemented in increasingly less complex products to reduce power usage. However, simply selecting the latest low power micro and implementing sophisticated power management is the “big stick” approach to power savings. There are dozens of hardware design decisions and hundreds of firmware design decisions that will either enhance or sabotage your power saving efforts. The accumulation of these smaller savings can often save more power than the big stick savings.

There are many things to consider in your designs, some will have big pay-offs in power savings but . The over-riding theme in the tips and techniques I will present is anything your design does that it doesn’t need to do is wasting energy. That sounds very obvious but many of the things we do in our designs that waste energy often are not obvious. Some of the information that will be presented can be found in other places on the Internet but newcomers to low power design may not have seen it. Many of the tips and techniques that I’ll discuss were learned through years of developing low power products. I look forward to helping with your power saving efforts.