Diodes (including LEDs) are one a few types of devices where the circuit design can play a part in determining the extent of the leakage current in that design.

Diodes can present substantial leakage currents when in a reverse voltage condition, this is often referred to as reverse current. Similar to capacitors, there are a number of factors that come into play in determining the level of leakage current. Unlike capacitors, there aren’t any simple formulas to help you estimate what the reverse current is for a diode. Diode reverse current varies considerably from device to device and isn’t necessarily dependent on voltage rating, current rating or physical size.

The graph below shows a typical diode voltage/current curve. Notice that under forward voltage conditions (blue shaded area) diodes conduct very little current until the voltage starts approaching the diode’s forward voltage. Although not technically a leakage current, current will start flowing at a few hundred millivolts below the forward voltage level where the diode is expected to “turn on” and start conducting. Under reverse voltage conditions (pink shaded area), some amount of leakage current occurs as soon as the voltage is reversed and increases as the reverse voltage increases. Note that this graph is not to scale, the forward voltage of a diode is typically less than one volt while the reverse voltage and breakdown voltage are usually tens to hundreds of volts. 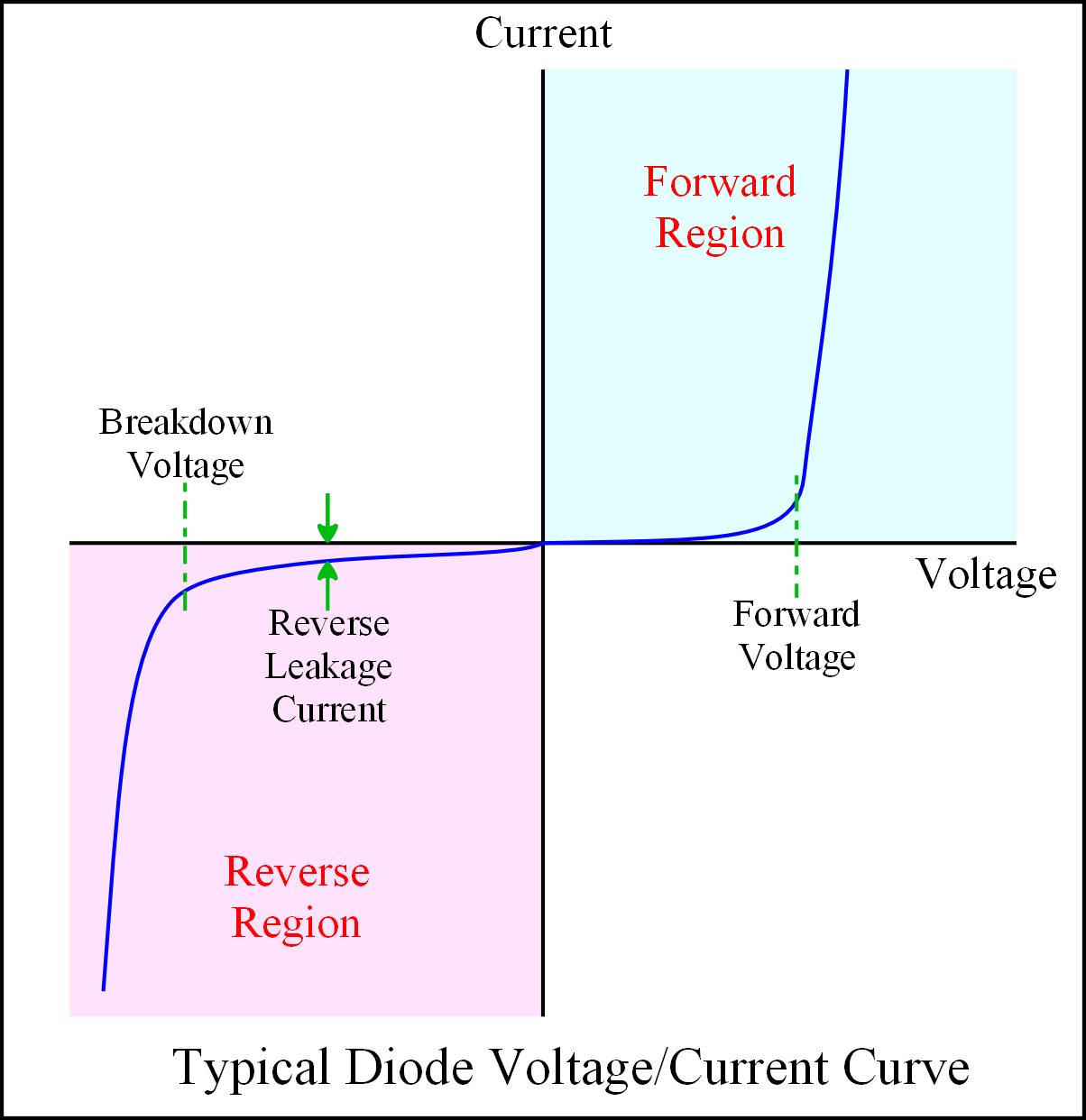 There are a few things to consider regarding diode reverse current:

LEDs will exhibit similar reverse and forward currents as other diodes. A few things to consider specific to how LEDs are typically used: 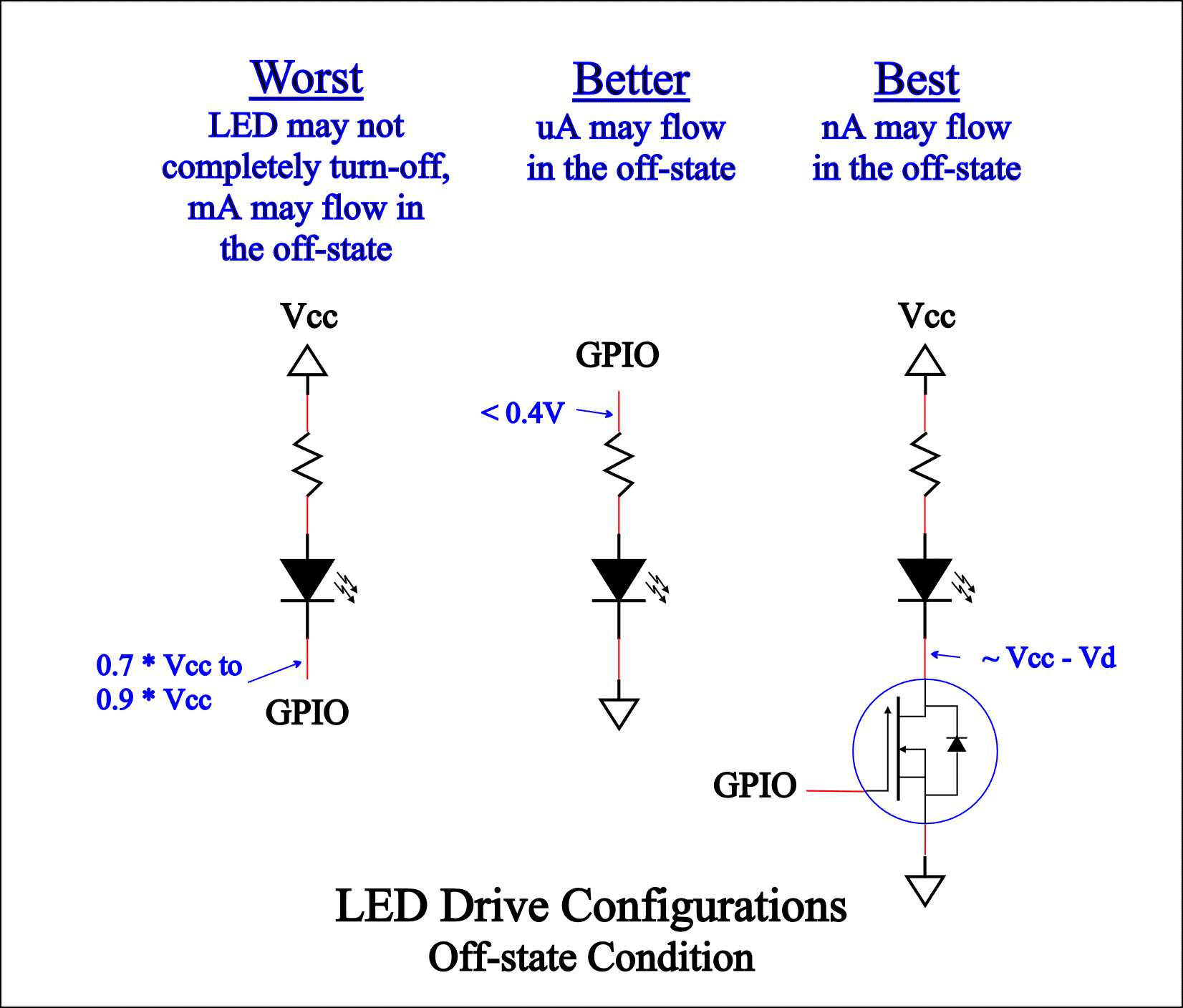 Unrelated to leakage current, LEDs can waste a lot of power if used without careful consideration.  Users love LED indicators but generally don’t have a clue about their impact on a device’s battery life. When LEDs are required, here are a few things to consider to reduce their power consumption:

Up to this point I have covered leakage currents, currents that may not be obvious but are usually specified in part data sheets. This part will deal with “current leaks”, non-obvious current flows and power losses that are caused by the circuit design. In some cases these “current leaks” may be reduced or managed somehow, in other cases you just need to be aware of them so they can be accounted for in your power budget.

Before leaving semiconductor devices, one of the biggest power wasters if not used carefully are MOSFETs. While MOSFETs usually have a leakage current spec, it is usually on the order of tens to a few hundred nanoamps. The bigger issue with MOSFETs is inefficient operation from not operating them under the right conditions to allow them to meet their Rds(on) spec. Borrowed from the “Low Power Design” e-book, here are a few things to consider when using MOSFETs: 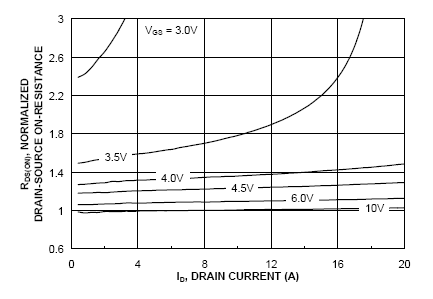 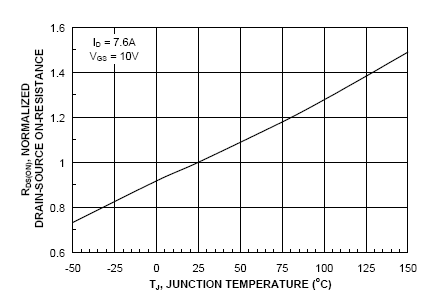 This started out to be a 2 part article, next week I’ll cover more sources of power loss commonly found in circuit designs to wrap-up the 3rd and final part.